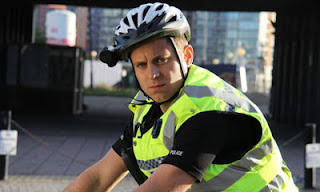 What a brilliant title. It perfectly conveys what the film is trying to do, ie a black comedy with a very British flavour. Shame however than the finished product does not live up to the promise of its title!
Let's face it, there is a bit of a Daily Mail reader in the most liberal among us, it happens in the best families. Who hasn't harboured some murderous instincts while being confronted with some ASBO people at large, in public transport, in the streets, vandalising public properties, being too noisy or worst crime of all, skipping a queue (heaven forbid!). Yet we are in Britain so the the worst most of us will do is roll our eyes and tried to convey our utter disgust in the least threatening fashion possible.

But in May I Kill U?, Baz (Kevin Bishop), a police officer, decides that enough is enough, and he embarks on a one man vigilante rampage against all of those who abuse society and get away with it, and yes, even the old sweet shoplifting granny. Politely asking his victims "May I kill u?", he then promptly despatches them (whether they had agreed to it or not) while filming his exploits, which obviously end up on YouTube, turning him into an unlikely internet phenomenon in the process.

Apart from the title, the premise is also intriguing. While the vigilante genre is very popular in the US, it is a lot less common across the pond, and I can only think of as a recent example, the nauseous Harry Brown (with Michael Caine going all self-righteously Charles Bronson on us, in Peckham). It is probably down to a mercifully stricter weapons law, as well as the aforementioned affability found in these shores (apart from Peckham).

And May I Kill U? starts off promisingly, cleverly using the London riots of 2011 as the background of its first scene (the riots were actually incorporated into the script at a later stage as they unfolded while the script was being written), as well as visually incorporating elements of popular social networks (especially Twitter), as an echo to the rambling of old school media who vilified them at the time.

Sadly, the film suffers from a lack of focus and ideas, past its initial first scenes. After an amusing opening where a looter gets his comeuppance, smashed on the head with the very item he had just looted, the pace slows down and we are often left wondering where this is all going. The script would have needed a lot more work and a clearer direction, and the story almost becomes unpleasant in parts, with the particularly misguided character of Baz's mother (played by the fine Frances Barber, here lumbered with an unpleasant part).

As for Baz himself, it was an inspired piece of casting to use funnyman Kevin Bishop (The Kevin Bishop Show, L'Auberge Espagnole but also The Muppets Treasure Island!), but just like the film himself, left without much direction, his acting is often approximative.

At least the film does not try to bore its audience with some rancid politics, it is clear that we are presented with a black comedy above all, not a lecture. There was a good idea in here somewhere, but one which would have needed to be a lot more developed.

May I Kill U? UK 2012. Directed by Stuart Urban. Starring Kevin Bishop, Frances Barber, Hayley-Marie Axe... Out in the UK on the 11th of January