Plot: Three aliens from the planet Zots find themselves in exile on Earth when it is believed that their emotions are destroying the ozone layer of their home planet. A stay on the blue planet is meant to break their hearts when exposed to the cruel dating scene of our specie. But nothing ever goes to plan, and romance is in the cards...

Looking at the synopsis of Codependent Lesbian Space Alien Seeks Same, I thought I had it all figured out. A certain fraction of the LGB community has long had a fondness for the naff science-fiction of the 50's, and especially its more extravagant aspects, be it glitzy costumes and campy villains. So I was expecting a laugh out loud sci-fi comedy with a lesbian twist.

And obviously, there is an aspect of it which is very apparent in this film, with the fantastically lo-fi costumes/make-up of the aliens (think Coneheads), down to their spaceship which would make a prop from an Ed Wood film looks like something out of Avatar (think a tent with some christmas decorations cellotaped over, and looking like an aluminium pie dish from the outside). 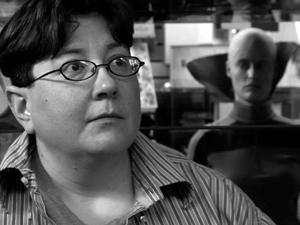 But the film took me by surprise, not being the broad comedy I expected. Instead, it is actually a throwback to a certain era of the 90's when the sudden explosion of affordable digital cameras gave birth to a new wave of American independent cinema, with a majority of these films turning out like Jim Jarmush imitations, set in New York and with the obligatory arty black & white.

I might sound like I am looking down on those but I actually have a certain nostalgia for them. When I was attending Cannes in the mid 90's, it seemed that every film out of three presented in the smaller selections belonged to this kind, the majority of them having vanished into the oblivion since, yet they were not without their charm. Besides, a few gems came out of this time (and not all in black & white). I am thinking The Living End, The Addiction, and especially Go Fish, a similarly themed low-budget lesbian rom com (but with no space aliens). 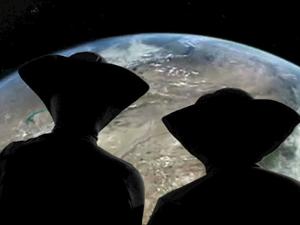 And while black & white 90's indie cinema and 50's sci-fi spoof sounds like unlikely bedfellows, surprisingly, it works, director Madeleine Olnek's best decision being to actually eschew any kind of broad humour, replacing it with understated charm and an irony-free romance.

She follows her original concept with a surprisingly straight-face, meaning that we actually care for the characters. This is not to say that it is without laughs. An early scene that shows the aliens placing small ads to meet potential earthlings suitors and the subsequent disastrous first dates which ensue is just hilarious, with one respondent not quite ready for this kind of perceived role play. There is a sweet, Splash like innocence to the aliens' exploration of our planet and its inhabitants, and their own complete lack of self-consciousness. And my favourite line has Jane, upon finding out that her newly found love interest is indeed a space alien, come up with "I did wonder about the gills..." 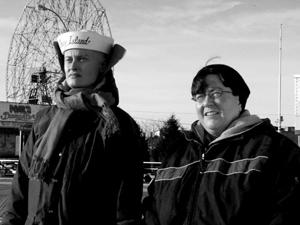 But the film is actually more of a rom-com, not the travesty that has been vomited upon us by modern American cinema and Richard Curtis, I am talking about the gentler end of the spectrum. For once, we are presented with an outsider who is a real outsider, just not a version of it by somebody who could still feature in a Hollister ad if they just took out their glasses. Here Jane (Lisa Haas) is a frumpy lesbian in her mid 30's with a dead-end job in souvenir shop, and with a therapist desperate to help her snap out of her alien abduction fantasies. She is not so much an outcast as somebody who has gotten used to going entirely unnoticed her whole life. And the burgeoning romance between her and Zoinx (Susan Ziegler), as unlikely as it sounds is surprisingly touching and affecting, not being played for cheap, quirky laughs.

Now I do have to warn you that we are taking the lower end of the low budget scale here but this is not meant as an insult. For a film that has been visibly made for about three dollars (make it six as somebody buys a doughnut at some stage), it features a surprisingly gorgeous black & white cinematography. And while a subplot involving two government agents is mostly superfluous, it has its heart at the right place. Codependent Lesbian Space Alien Seeks Same is a charming oddity which I thoroughly recommend. It was presented at Sundance last year and has now been released on DVD by Peccapics in the UK.