"Who Can Kill A Child?" Review: Bloody Pinata! 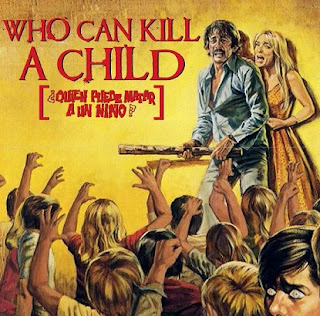 Plot: An English couple, holidaying in Spain, makes their way to a secluded island a long way off the coast. Upon arrival, they soon realise that something is wrong, very wrong, as the children on the island have gone crazy and are murdering all the adults!

Review: This 70's oddity seems to have been brought back to the general filmic consciousness on the back of its recent release on DVD, and while I had never heard anything about it, a few articles and twitter discussions got me curious. That and the fantastic poster design, which, depending on the version, evokes Italian giallos as well as video nasties of the era. Who Can Kill A Child did suffer from the curse of the thousand titles upon its release upon Europe, as many horror films did at the time, with the most idiotic title being the French one: "The Revolt of the Year 2000" Well I have got news for you, the film is not set in 2000. Shame nobody thought of calling this: Bloody Pinata (you will see why).


The plot makes it sound like "Village of the Damned" gone on holiday in the sun, and there more than just similarities between the two films, alongside The Children of the Corn. A few aspects sets this one aside though. It starts off with some pretty chilling opening credits, with some archive footage of all the atrocities children have been the victims of at the hands of adults throughout the 20th century: concentration camp, napalm strikes during the Vietnam war etc... It surely trounces X-Men 1 opening scene with the young Magneto in Auschwitz for its sheer grimness! 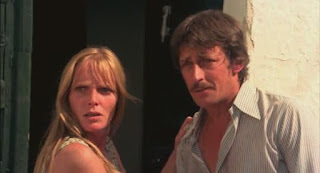 And then the sun drenched, mediterranean atmosphere is miles away from the settings of most horrors. Not a single scene is set at night or even in a dark confined place. Here is the horror is truly in the open, blindingly sunlit, although the film does rely on the hopeless feeling created by the isolation of the island.

Also, the main protagonists are rather dull and not exactly likeable. They even make a very questionable decision half-way through, leaving a character to face a certain death while they could certainly have taken her along to relative safety, which makes it harder to really root for them from that point onwards.

But what truly sets is apart is the sheer audacity of some of its scenes... While the gore is largely shunned, what the director managed to get away with showing got me gasping a few times, I am particularly thinking about that ONE short scene at the end. I am not sure whether the BBFC was not paying attention, and while I sadly can not assess whether I saw the uncut version or not, I absolutely cannot imagine any film getting away with this at this moment in time. In fact, should you wish to amuse yourself, show this film to any Daily Mail reader, or better, Melanie Phillips, and observe with much glee. I kept hearing Maude Flanders in my head screaming "Would anybody please think of the children". 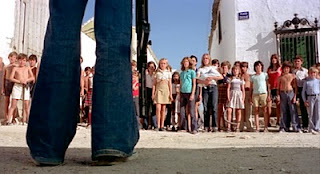 There is more ambiguity in here as to what is causing the children to turn into blood lusty murderers, which is very unsettling, unlike Village of the Damned which coped out, making its killing children the spawns of an alien race. But what is really shocking eventually is not so much the violence of the children towards the adults, but the other way around when they try to fight back. And while the recent British horror "The Children" had a rather similar plot and scenes of adults fighting back, it certainly cannot beat what I saw in this for its pure shock factor. Without spoiling it, it will come as no surprise that the ending is particularly downbeat, with a nod to Night Of The Living Dead.

Unfortunately however, for all its audacity, the film does not quite reach the same heights as some of the horror masterpieces of the times. I am not sure how much the audience at the time knew about the plot, but watching it now feels a little predictable for most parts. While I might have spoiled the main plot in my short summary, this is what every other reviewer have done, as well as IMDB. So we miss the element of surprise and you can easily figure out what is going to happen for most of the film: the two tourists turn up at the island, they keep bumping into groups of menacing children who disappear, running and grinning, until finally they bump into the few adults left and witness them being slaughtered.

And while the film is never boring, and tries to genuinely create an oppressive atmosphere, it is never quite as gripping and nerve-wrecking as one might expect. The setting of this deserted Spanish village is unnerving, and you can clearly how it would have influenced the game Resident Evil 4 for its iconic first act, but the tension does not quite rise high enough. There is a very fine line between subtle, atmospheric and mild boredom, which the film always feels in danger of crossing.

Nevertheless, it does remain worth catching up for fan of horrors and oddities. The trailer below is mental but also very spoilerific so be warned.