The French Oscars: The Cesars

France might have invented cinema, but it took them some time to come up with an awards ceremony. Indeed, their "Oscars", called the Cesars, only began in 1975, decades after the Oscars. By the way, the name is based on the sculptor of the same name who designed the actual award (which is basically a compacted car reduced to the size of a log, I kid you not), not the Roman emperor! Despite French cinema being one of the best in the world, their awards make little impact around the world, namely because they choose to only hand them over solely to French films. Which is what the BAFTA's should do rather than suck up to Hollywood, if they truly wanted to support homegrown cinema. But I digress.


Despite the popular belief that French cinema is all about highbrow, France does produce an incredible amount of dire yet popular comedies which mercifully never make it outside the country, as well as a certain kind of "quality"entertainment, usually literary adaptations picked from the endless supply that the French literature has produced. And it has become a trend that the best film nominations will usually feature one of each, with usually the most successful film at the box office getting a nod, alongside a smaller, more arty film that will invariably win and get producers and the right wing press lamenting about the awards being too elitist. This year, the arty spot is occupied by Pater by Alain Cavalier, which was shown in Cannes, but is certainly not the favorite however.

So what is of interest in the list of Cesar's nominations from an outsider point of view? As usual, the most successful French film of the year has been nominated for best film, Intouchables, which is not a remake of the Brian de Palma 1986  film, but the story of an unlikely friendship between a quadriplegic businessman and a young man from a rough suburb straight out of jail. It sounds like the kind of inspirational drivel we lambast the American cinema for, and I doubt it will ever come out anywhere else, despite clocking in at more than 18.4 millions admissions, an astonishing figure that means nearly one French person out of 3 has seen it! It has become as they like to call it over there, a "phenomene de societe". 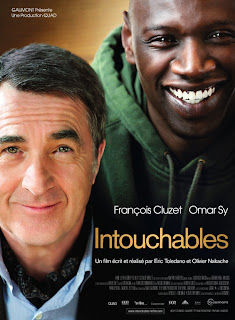 Obviously, The Artist has received plenty of nominations, but perversely, it might not be in the same position as a front runner as it is for the Oscars. It has been successful at the box office and well received by critics, yet it doesn't seem to have received quite the same sweeping enthusiasm as in the US. It doesn't help that producer Thomas Langmann (son of the late and legendary producer Claude Berri) is basically an idiot who sadly never wastes an opportunity to open his mouth in the medias and talk nonsense. He recently publicly shot down in flames French cultural magazine Les Inrocks for having the audacity not to put The Artist in their top 20 of 2011 (despite the extremely positive review and subsequent articles that they published when the film came out.)

Polisse, by Maiwenn (remember her, she was the blue alien diva in The Sixth Element), got a jury prize in Cannes already, and could well create an upset. So could La Guerre Est Declaree, another low budget sleeper hit about a young couple having to cope with their child's terminal illness, which has won big at the box office. It is nice to see Aki Kaurismaki's Le Havre being nominated for best film, given that it seems unable to get a release in the UK. It is surprising however that Bertrand Bonello's L'Apollonide (The House of Tolerance) did not get nominated as best film, given the enthusiastic reviews it has received over there. Here in the UK where it has just come out, it has been dismissed as pretentious and misogynistic.

Another interesting aspect of the Cesars is their award for best newcomer (or literally and rather poetically, Best "Hope"). One can only imagine the atrocities that would be committed at the Oscars if such an award had been introduced. The Award winning Macauley Culkin anybody? The French newcomers nominees usually consist exclusively of floppy haired young French men who smoke Gitanes at a cafe in the Quartier Latin, and sleepy eyed young "ingenues".

The nominations for best Foreign film reveals a few surprises also. It includes Drive, which as been shown very little love at the BAFTAs and Oscars. The French do love their American genre films to be subverted so it should not come as a surprise after all. Also nominated Melancholia, which confirms yet again that the French are very good at separating art and the controversy around it. Just make sure Lars Von Trier does not go anywhere near the stage. Or do not let him talk. Ever again! Black Swan could be a surprise winner however as it has enjoyed a tremendous critical reception over there. No nod for The Tree of Life however, despite its Cannes win.

Given how much noise the Brits make every year about British success at the Oscars, it is a little disappointing that they fail to mention when one of them is receiving some acclaim over in France. This year, director Michael Radford is nominated for best documentary for his films about pianist Michel Petrucciani. And did you know that British actress Kelly Reilly (Sherlock Holmes) was nominated as best supporting actress for her parts in Les poupees Russes (Russian Dolls) back in 2006?

The ceremony was renowned for being a tedious bore until the start of the last decade, when a new breed of comics took presenting duties, especially Eurotrash's Antoine De Caunes. And to add a special touch of glamour, a Hollywood star is given an honorary award every year, which means they have to sit through a whole ceremony they cannot understand a word of, watching people they know nothing about. This year, it will be awarded to Kate Winslet. Let's hope she brings a good book.

The full list of nominations can be found here.