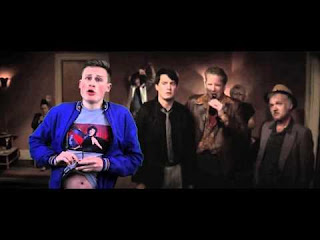 Mel Brooks once called David Lynch a Jimmy Stewart from Mars. It looks like the red planet has just offered us a new offspring as along came young comedian Daveo Mathias, AKA Cancer Merchant, who has written and is performing a rap tribute to the master himself. And after the Lee Hardcastle's Pingu/The Thing remake, this is the second best thing I have seen this year so far. Will 2012 be the year of fan tributes? Is somebody busy remaking David Cronenberg's Videodrome in their bedroom with a lot of plasticine and sellotape?


There is such utter brilliance on display in here that I do not even know where to start. The man himself uncannily looks like a young David Lynch in the video, down the to haircut, with an obsessive knowledge of all of his films. The lyrics are just a joy, and I do hope to be able to find them somewhere on the net in their entirety to transcript them. 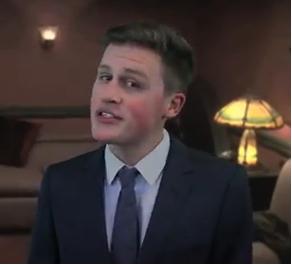 A young white man rapping about the trials and tribulations of being David Lynch, who is said "not to be normal but normal is weird to him, like those motherf&*%ers who watch Transformers 3" and who "has seen Jeffrey being beaten up by daddy and his friends but it is somehow more disturbing watching Two and a half men (I concur)", is just as Lynchian as anything you will ever see! And how about his hilarious exploration of the Frank character (Dennis Hopper in Blue Velvet) as a "fragile little boy filled with decades of abuse, embodiment of America, f*$ks anything that moves" or the bit about "Laura Dern is not being treated right like an animatronic T-rex".

But I shall not spoil it any longer, this demands repeated viewing to enjoy all the richness of the lyrics. With the David Lynch retrospective coming up at the BFI in London next month, this rap video should be played before every single screenings of his films for his adoring fans!
at 22:45