It’s been some years since I was last at London’s LGBTQ+ film festival, in fact (rather shamefully), my last one was in 2012 before it was rebranded as BFI Flare. Over the years I’ve seen some excellent films there, many of which have never seen any further UK release. This year I’m going back, with a press pass, because I feel like this is an important cinematic niche that I haven’t been exploring enough lately, beyond the limited amount of material that emerges from the festival on to UK screens.

This year I'll be attending the festival largely from home, but hopefully still bringing you plenty of coverage of interesting shorts and features. 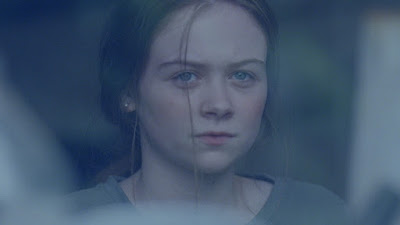 In about 1994 my stepfather, who has been involved in farming his entire life, set up Farmline, a kind of Samaritans for Kent farmers. Landline became the first film I watched for this year's Flare because the synopsis made me think - with real pride - of what he did.

Landline is a short documentary based around calls to the Gay Farmer's Helpline, founded in 2010. Each vignette is narrated by a caller as we see beautifully shot images that unfold the story in impressionistic form. There are moments that feel hopeful; a brief story told over images of the aftermath of a party, of a farmer who found more support than he expected when he came out, but more common are the bittersweet stories or the ones that prove just how far we have still to go in terms of acceptance.

The callers speak with candour, and director Matt Houghton treats their stories with a moving tenderness. For me, the story that hit hardest is about a Welsh farmer  who speaks of a man he met in tai chi class. After spending a long time talking after classes, he would have to remind this man to go home to his wife and kids. The image of the two of them sitting together laughing, set against the cut to the farmer sweeping out the animal pens alone, is completely wrenching.

A beautiful film and a valuable one, in that it might help to bring extra publicity to an excellent service, Landline says more in ten minutes than many features manage in two hours. 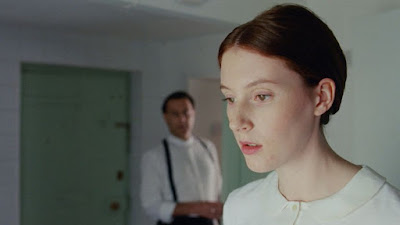 Nostalgia is everywhere at the moment. Many films are trying to recapture something of the past, but I often find myself feeling that something is missing, that there is a lack of authenticity. In looking to the folk horror of the late sixties and seventies, The Sermon doesn't suffer from that problem. From the texture of the visuals to the choice of aspect ratio, right down to the font chosen for the titles, this could sit alongside something like The Wicker Man and not feel out of place.

The sermon of the title is being given by the religious leader of what appears to be a very insular, conservative, religious community that has recently discovered that one of its members is a lesbian. The sequences of the woman being taunted, tied to a frame and having fruit thrown at her are straight out of The Wicker Man, but it's some of the more directly horror inflected imagery; the presence lurking in several shots around her young lover Ella (Molly Casey), that really struck me. These brief and creepy shots reminded me of the vampiric character from Valerie And Her Week Of Wonders, but their purpose is a little different here than the entity that wants to seduce and corrupt Valerie.

I don't want to go into what happens, but there is a rumbling tension throughout, accentuated by a pipe organ and synth led score by Bizarre Rituals. The images are striking, with a frequent emphasis on looming figures (the priest, the two boys who see Ella leaving her lover's home, the figure by Ella's side) and the composition is often as beautiful as it is unsettling. The film doesn't firmly locate itself in time, and while the style looks backwards the film's concerns are, in some communities, still current.

This is a striking and haunting calling card for director Dean Puckett, I hope people get to see it projected, and that there is a feature film in his not too distant future.

Landline and The Sermon both screen in the Altered States shorts programme, on Saturday 24th and Sunday 25th of March
at 11:06