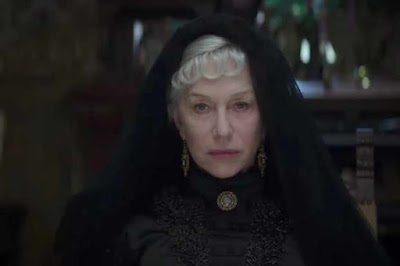 Nothing fills you more with confidence than a horror film being dumped in February with the reviews being embargoed until the day of release. Winchester has a few more elements going for it than your average low budget rubbish however: an illustrious cast lead by a Dame, and a pair of directors with an interesting pedigree and an infamous mythology. Plus if anything, a few weeks after Insidious 4, Winchester also has an older woman as the lead, a pleasing new trend?

Winchester is based on (and the term is being used loosely) the true (and stranger than fiction) story of widow and heiress Sarah Winchester at the turn of the last century, who, believing that she was cursed, convinced herself that the only way to escape her supernatural tormentors was to ensure her sprawling house was never finished, adding rooms then having them destroyed. The film expands on this and add the fictional character of Eric Price (Jason Clarke), a drug addicted doctor sent by the board of Winchester to assess her mental health, hoping to take the control of the company back from her. Eric Price finds Sarah being haunted by the ghosts of all the victims of the Winchester firearms, while his own troubled past catches up with him.


Winchester has a pleasantly classical quality to it, thanks to the elegance of the direction. A lot of care has been given to the interiors and costumes, although budget limitations show in the external shots of the never-ending house, which looks rather fake. Fans of creaky haunted houses will find the film refreshingly old school and familiar, like those ghost stories you read at Christmas in front of a fireplace. Winchester is surprisingly character-driven, and Helen Mirren and Jason Clarke have an unexpected chemistry. Sarah Snook, a revelation in Predestination from the same directors, is given little to do with her supporting character but her presence is welcome all the same.

So yes there are some rather unoriginal jump scares (although a very effective one had the audience do the swear/gasp out of surprise then laugh routine). It is also a shame that the directors, no doubt pushed by the production, felt the need to tag on some uninspired CGI that looks straight out of a mid 2000's horror, all the more disappointing considering how the Insidious franchise recently revitalised the haunted house sub-genre with some much more original ghosts aesthetics.

The script is fairly straight forward, and does not spend more time than is needed for exposition, or dragging the proceeding with a "Is she crazy?" red herring, although it actually goes a little too fast, it almost feel as if we are missing a second act. It braces with themes of guilt, and the consequence of America's obsession with guns, without feeling too preachy.

As for La Mirren, while this will obviously not being remembered as her finest performance, she is eminently watchable and, the mark of a true star, totally committed, never giving the audience the feeling that the material is beneath her.

Of course, the film has none of the crazy inventiveness of the Spierig Brother's Predestination, and you would be hard pressed find much evidence of a personal touch, yet they deliver an charmingly old-fashioned and reasonably entertaining ghost story, far from the disaster one might have expected.

Out on general release in the UK and USA today