Hunt For The Wilderpeople by Taika Waititi 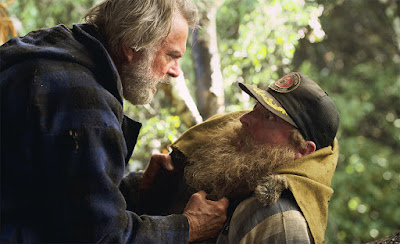 While this disappointing summer has been filled with studio blockbuster #brands, Taika Waititi invites us into the New Zealand bush for a witty coming of age road trip and a breath of fresh air. His zany and energized sensibility provided laugh after laugh with the excellent What We Do In The Shadows. Wilderpeople is his Moonrise Kingdom, a charming children's tale with a father/son dynamic that has more excitement than most of the summer blockbusters.


The infamous teenage delinquent Ricky Baker (Julian Dennison) travels from foster home to foster home before landing with a married couple on a New Zealand farm. His new “auntie,” who lets him run away at night as long as he’s back in the morning for breakfast, gives him the most comfort he’s ever had. His "uncle" Hector (Sam goddamn Neill), who we first meet while he's carrying a shotgun and a dead animal, is more indifferent to him. Ricky doesn't care though. He's free to roam with his pet dog on the countryside and write haikus, a trick his therapist gave him that provides both laughs and insight. This idyllic setting is the first place he can call "home," and Waititi smartly takes his time to let us watch Ricky slowly become comforted. It's a decision that grounds the emotional realism because the rest of the film is like a teenager hopped up on sugar.

A series of unfortunate events lead Ricky and Hector to be New Zealand's most wanted criminals. Waititi has a blast creating a storybook with creative flourishes although it never touches the originality of his previous feature. He tells this story through chapters, a fun stylistic choice that eventually bogs down the narrative, and its pace suffers when Waititi tries to open up his world with more characters and a detour that Ricky takes. The story has all the familiar beats of a couple on the run flick, but Waititi's unique brand of humor in both the writing and film techniques makes it a breath of fresh air in this 2016 blockbusterscape.

A mid film verbal battle between Ricky and his child-welfare officer is gold:

Waititi is at his best when his characters are simply trading dialogue. He keeps Ricky and Hector's hijinks lively as the camera spins and zooms while they flee from the police and bounty hunters. Waititi references American and New Zealand 80s action films in the third act, and it's too big of a leap for a small story that's about a young boy looking for a home and a crotchety old man who forgot what home is. The stretching out and adding to something that’s already working well cause stumbles during the second half. However familiar it may be, the duo provides a spirited dynamic and enough heart to outweigh the stunted pace and overly produced finale. Hunt For The Wilderpeople is a fun buddy adventure story about finding a place to belong, and the realization that it's not a place at all.

Hunt For The Wilderpeople is currently out on limited release in the US. It is released in the UK on the 16th of September.