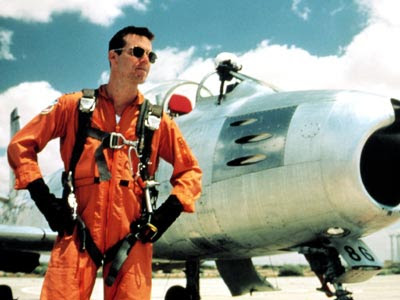 Check The Gate is a new season dedicated to presenting films on film that will run at the Prince Charles cinema this summer. It is a collaborative efforts curated by various journalists and film collectives such as our friends at The Badlands Collective. Among the impressive line-up, peppered with rare films and old favourites, the highlight might well be the 70mm presentation of The Right Stuff, probably one of the greatest American films ever made. Our contributor Andy Zachariason tells us why, and it feels fitting to publish it on this 4th of July.


In 1980 the silhouette of a man in a fedora and the crack of a whip signaled a new hero in American cinema and set the stage for the onslaught of 80s popcorn spectacles. Indiana Jones was the child of blockbuster wunderkinds Spielberg/Lucas and brought black and white morality. In 1982 an alien befriended a fatherless young boy and in doing so restored the balance of a nuclear family. In 1985 a teenage boy went back in time to 1955 to repair his parents marriage and restored order to the 1980s. The decade of Reagan era cinema is loaded with tales of returning to a "simpler" time, but there is one film that crystallized that 1950 American spirit and hero better than any other. In 1983 Philip Kaufman's The Right Stuff, based on Tom Wolfe's novel, merged spectacle with decades of American discovery. It was as if the soul of American ingenuity had finally been given the proper scale.

Cut from the silhouette of Indiana Jones to 1983 when a man in a leather jacket rides up on his horse and stares at a roaring piece of metal. Sam Shepard as Chuck Yeager is so mythically and effortlessly cool that he literally made Chuck Yeager a public figure again. Yeager’s story runs sideways strengthening, contrasting, and building the other story of the Mercury seven. The saga begins at the end of the 1940s with Yeager and finishes right before Kennedy announced plans to land a man on the moon. The catalyst for much of this scientific progress is those pesky Russians who already had a man in space! A young and out of breath Jeff Goldblum delivering this news to a board room is up there as peak Goldblum. It's feared that the Russians will soon control space and be able to drop nuclear bombs wherever they please. Eisenhower declares "I want test pilots!" and so begins the search for men with the right stuff.

Sergio Leone's Once Upon A Time in the West (1968) essentially ended the “classic” western as his mythic cowboy rode away from society. 15 years later in The Right Stuff, the western was reborn as cowboys climbed out of the heartland to trade in their horses for rockets and once again become heroes. America merged brawn with brain as the balls of the cowboy propelled science. The team selected is John Glenn (Ed Harris), Gordo Cooper (Dennis Quaid), Gus Grissom (Fred Ward), and Alan Shepard (Scott Glenn). Each is pitch perfect in their roles by layering macho spirit with a vulnerability and earnestness that feels almost entirely gone from modern heroes.

But The Right Stuff's true greatness stems from its formal qualities and technical ambitions, which are downright radical for a studio film. Tarantino's declaration of The Right Stuff as the first "hip epic" is good, but I think it's one of the first "art epics." Kaufman met with experimental filmmakers to figure out how to technically accomplish his ambitions. He describes his film as "plotless" and indeed the structure is nearly lucid. Sure, it's pinned down by breakthroughs of American discovery and ingenuity like Yeager breaking the sound barrier and Shepard as the first man in space, but outside of the adrenaline rushes are moments of introspection and abstract qualities. Like the characters ambitions, Kaufman pushed his film in every direction he could. 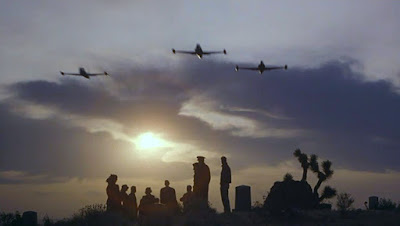 The film begins with the mention of a "demon" in the sky and ends with Gordo Cooper staring into the beyond and declaring it "a heavenly light." Early on when Chuck Yeager breaks the sound barrier, a mysterious substance is seen in the sky. For a moment you're in 2001: A Space Odyssey! Later on as John Glenn glides through space another alien like substance surrounds his ship and Kaufman cross cuts this with aboriginals at a tribal fire. They're ethereal, abstract, wondrous moments existing somewhere between the "demon" and "heavenly light" while evoking the feeling of a time when men began to push the envelope of what humans could do and began to find out what their place in the universe was.

Kaufman also deconstructs and then reassembles the myth of the American hero. The film is as skeptical of its heroes as it is enamored with them. Kaufman satirizes the media, focuses on the comedy of the men training, masturbating, their failures, and spends more time on Alan Shepard peeing his pants than his actual mission into space. Towards the end of the film, and perhaps it's finest hour, there's a near 10 minute sequence of Sally Rand dancing naked that's cross cut with Chuck Yeager riding as high as he can to the limits of Earth's atmosphere. It's a quiet and expressionistic sequence that carves in film all of their accomplishments. Words can't fully describe what the sequence and entire film reaches, but as Yeager walks away from his crash one of the medics asks "Over there, is that a man?" to which the other responds with a smile "Yeah, you're damn right it is!" Well, the chills I get from that line come pretty close to what The Right Stuff is about. Constantly shifting between art house and commercial entertainment, it ranks as one of the greatest American films and stands as an elegy for the lost American soul.

Tom Conti's iconic score stirs excitement and transports us back to a time when an entire nation gazed up at the sky. The Right Stuff is burning with bravery and wonder from the first frame until the very last one as Gordo Cooper sails across the ocean sky. It's a moment that puts a lump in my throat and tears in my eyes as I wish America could once again "push the outside of the envelope." 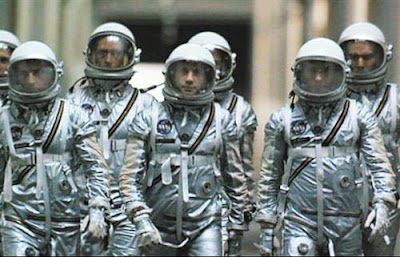 It's hard to say why The Right Stuff didn't grab audiences at the time. Perhaps they had no desire for historical biopics or they just wanted to see Return of the Jedi again. I find it fascinating that much of the decades popular films were about father figures (literal and figurative) and this one was the least fantastical (but most abstract) and got ignored. Looking back now we can see its influence on everyone from Quentin Tarantino to James Cameron to Christopher Nolan. Of the 80s popcorn entertainments, The Right Stuff is the most complex, technically ambitious and best captured the feel of an era when men said "fuck it" and shot for the stars. Reagan era cinema was filled with illusions of a “simpler” time that likely never existed, but The Right Stuff is cinema's strongest argument that it did.

For more information about the Check The Gate season and to buy tickets, click here