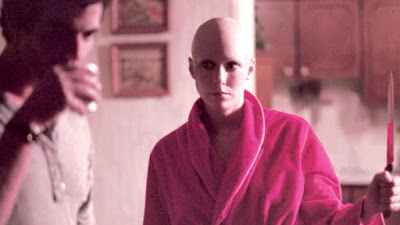 In Taxi Driver (1976), the contradictory and unstable Travis Bickle (Robert DeNiro) - an ill-educated Vietnam veteran and porn-addicted romantic - is a product of the same gutter-level environment that he so despises. Though illiberal and unhinged, in his desire to clean up the streets Bickle is not unlike the idealistic political campaigners with whom he keeps crossing paths - and in the end, while we have seen for ourselves both his psychotic volatility and its bloody consequences, he will be publicly declared a hero. Made just two years later, Jeff Squirm Lieberman's eerie Blue Sunshine plays with similar themes, while inverting Taxi Driver's dynamics.


Like Bickle, our hero Jerry Zipkin (played by Zalman King, best known for later producing and directing popular erotica) is a society dropout whom we see stalking and hassling a candidate for high political office, and buying a gun to be customised for his own subsequent act of one-man vigilantism. Unlike Bickle, though, 'Zippy' is highly educated, of a decidedly liberal bent, and, despite the suspicions of the police who pursue him, innocent of any murderous intent. Here, rather, it is the less marginalised, more respectable members of the late-Seventies middle class who are seen as the ticking time bombs, as the history that made them who - and got them where - they are today explodes in America's face.

Thirtysomething pillars of bourgeois society are going on frenzied, senseless rampages. All that seems to unite their lunacy is the perpetrators' Stanford backgrounds, the sudden onset of alopecia totalis, and the phrase "blue sunshine" - first heard uttered, bizarrely, by the policeman's pet parrot (foreshadowing Twin Peaks' material police witness 'Waldo the mynah bird'). Believed responsible for killings in fact committed by his crazed photographer friend Frannie (Richard Crystal), the fugitive Jerry tries to get to the bottom of the crimes himself, aided by his girlfriend Alicia (Deborah Winters) and his friend the doctor David Blume (Robert Walden), while doggedly pursued by Lieutenant Clay (Charles Siebert). What Jerry discovers is that all these bald-headed killers had, back in 1967, partaken of a campus-cooked batch of LSD known as 'blue sunshine', which has gradually, over the course of the subsequent decade, scarred their chromosomal makeup. His investigations lead him to statesman Edward Flemming (Mark Goddard) and his ex-college-footballer minder Wayne Mulligan (Ray Young).

"Ed Flemming is the future," states a voice on the television set, as Ed's ex Wendy (Ann Cooper) watches wistfully with the children whom she is minding. Later the children's mother will console Wendy by suggesting that her own divorce felt less like a betrayal than the breakup of the Beatles. "But then", the mother says, "I realised that they had become part of the past" - to which Wendy responds: "How can I forget Eddy when his gorgeous puss is plastered all over the city?". A sly cutaway to one of Edward's campaign posters - where his image has been grotesquely defaced and demonised by graffiti - suggests that there is also ugliness to this 'gorgeous' Congressional candidate and Presidential hopeful. Golden boy Edward certainly keeps a high profile, while sweeping Wendy and other aspects of his past under the carpet. Yet his history has left its trail. In Frannie's studio, Jerry finds a psychedelically distorted picture of Edward's younger face (with the caption 'blue sunshine') - and, in a masterful match-cut dissolve, this acid freakout posterboy bleeds and blurs into the 'salesman' demagogue that Edward has become ten years later. These many faces of Edward ring the changes - and continuities - of changing times.

It would be all too easy to dismiss Blue Sunshine as a po-faced, fear-mongering 'drugs are bad' exploitation flick (in the Reefer Madness mould). This may even - who knows? - be what Lieberman intended. Yet it becomes far more interesting when viewed as a nightmarish vision of an America ambivalent about its uneasy transition from mid-Sixties idealism to late-Sixties Manson burnout, and the double-edged legacy which that bequeathed to the future. For Blue Sunshine poses anxious questions about a late-Seventies America whose middle-aging middle class is made up, inevitably, of casualties from the previous decade, when the current establishment was first establishing itself.

He may be countercultural to a T(-shirt), but from early on in the film Jerry adopts someone else's suit as a disguise to help his investigation - and in one elaborate, confusing scene, he plays out the part of someone scoring heroin in a park while in fact he is receiving a different (but equally illicit) drug from a now upright doctor who had once actually dealt drugs on the side to pay his way through college. Here appearances are deceptive, as everyone parrots empty rôles laid out for them, not unlike the string puppets who mimic celebrity show tunes as a warm-up act for one of Edward's rally speeches. The violent lunatic rage of one character in a climactic night club scene may have blue sunshine as its prime cause, but it also no doubt reflects the un-suppressed response of many a '60s child to the next decade's overloud disco music. The baldness associated with blue sunshine is also nature unveiled - a shedding of vanity's many guises to reveal the bare id underneath.

Much of Blue Sunshine plays like a freakout version of The Crazies (1973). The alopecia of the afflicted is near indistinguishable from the more normal male-pattern baldness ("does he think he's the only guy in the world losing hair?", as one character puts it) or stress-related hair loss suffered by other characters - an ambiguity which becomes a source of considerable tension in the film. Drugs, the source of all the madness from the past, remain very much an ongoing part of the present landscape: the film opens with Dr Blume popping pills (something which he does throughout the film); at the hipster party where Frannie eventually goes on his vicious killing spree, another character is so high that he squawks, flaps and waddles about like a giant bird; just before running into the maddened Frannie, a trucker is shown giggling as he nibbles on a giant cookie; and even our hero (who was not at Stanford and never took blue sunshine) is mercurial, manic and prone to distressing hallucinations when upset. Here the crazies look just like the sane.

All this is helped by the (deliberately?) stilted dialogue and wide-eyed performances, amping up the paranoia by making everything - and everyone - seem just that little bit off. By the time it is over, quiet New York cabbies are not the only ones that cinemagoers will be regarding with distrust. After all, today's breadwinners and aspirant conformists are yesterday's rebels and washouts. Blue Sunshine just lets the cracks show.

Blue Sunshine is screening at the BFI as part of their Cult Strand on the 20th and 22nd of August. For more information and to buy tickets, click here
at 22:56