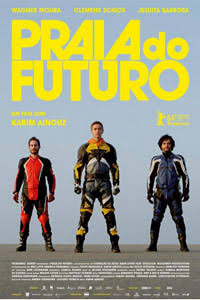 Daring new film by Brazilian director Karim Ainouz, 'Furuto Beach' (Praia do Futuro) starts off slowly, but builds into an intense passion between Brazlian lifeguard Donato (Wagner Moura) and German tourist Konrad (Clemens Schick). Shot against the harsh sunshine of Fortaleza (Ainouz's hometown) and the dark grey of winter in Berlin, this is a story of love and loss that will surprise in many ways.

The beaches in this part of Fortaleza are quite dangerous and drownings are common, and it is under these circumstances that lead to Konrad and Donato meeting.
Although it is a gay love story this film avoids stereotypes and very authentic. While Konrad is completely free having grown up in liberal Germany, Donato is closeted as he feels that he can't be out in Brazil.  His world revolves around his job as a life guard and helping his younger brother. It is only once he is in Berlin that he feels he can live a free life without people judging him. Konrad is an ex-soldier who spent time in Afghanistan and whose passion for motorbikes leads to him  opening a garage once back in Germany. Ainouz explained that he wanted to do a film with strong male leads that doesn't have the typical good guys against the bad guys. He has created a very intimate and contemporary world amongst the three main leads that plays out in three episodes. The third character is Donato's younger brother Ayrton (Jesuita Barbosa). As a young boy playing at the beach, he worships his older brother, believing he has super powers to conquer the waves that he himself is so afraid of.

At first the lack of dialogue and the fast pace annoyed me, but by they the second half I found myself enjoying the film much more. Anyone that has ever left their country to live abroad will be able to relate to the feelings that Donato struggles with as he copes with his new life in Germany. The guilt he feels for abandoning his family, especially his younger brother is somethings he is forced to deal with when Ayrton comes looking for him. What is interesting is that the neighbourhood of Futoro Beach, which built in the early 70's, was meant to herald a bright new future for this part of Fortaleza, however due to the high salt density (second highest in the world) the area started to crumble and corrode as the salt affected the buildings, cars and even household appliances. Ainouz shot the film with 35mm so that they could capture the harsh light, he said he was inspired by the travelogues from the 70's, and there is a vintage quality to the feel of the film.
Futuro Beach was screened at the BFI Flare Film Festival in London last month, and out for general release on the 17th April.