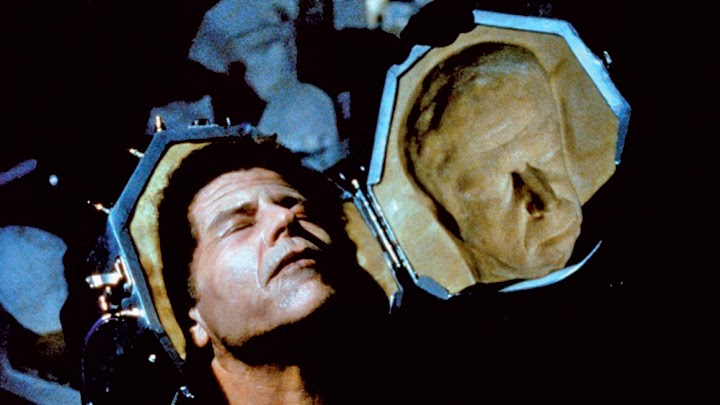 Popcorn is a hidden gem of 1990s horror cinema. It might have gone direct-to-video without passing Go and collecting £200, but that just makes it ripe for rediscovery and deserving of a second chance with fans of the genre. It is well worth your time and effort tracking this one down.

Set in an old picture palace, a group of students launch a fundraiser for their university film club and stage an all-nighter of cheesy old titles reminiscent of William Castle schlock. They renovate the place – sorting out the electrics – and hire costumes, equipment and memorabilia for the occasion. The films-within-the-film are: Mosquito, The Attack of the Amazing Electrified Man and The Stench. Each of these comes with a gimmick that is manipulated by a maniacal killer and used to orchestrate a gruesome – and very real – death. There is another film, too. Something far more dangerous and sinister. An art flick!


As part of the story, a long lost movie is rediscovered. Possessor, it turns out, was made by a loony cult leader, who, like a Jean-Luc Godard wannabe, theorised that cinema could transcend what often feels like its primary motive and remit: to entertain. During a premiere screening, the leader, Lanyard Gates, turned the movies into live Grand Guignol theatre, and murdered his family in front of a terrified audience. When the meddling school kids find this old surviving print and run it on the projector, a chain of slasher-movie events is set in motion that connect directly to heroine Maggie’s recurring dream/nightmare.

Setting itself apart from other horror titles of the period, the screenplay does not include the traditional staple irony of characters being aware they’re in a slasher scenario. They never comment on the events as being just like ‘a movie’. With its affection for old-style movie palaces and low-budget monster movies, Popcorn is a requiem for such venues of the past and the days when genre joys weren’t received so ironically. Popcorn is, there, closer to Joe Dante’s 1993 film, Matinee, than the likes of Scream (1996).

Popcorn had several interesting creatives involved. Bob Clark (Black Christmas, Murder by Decree, A Christmas Story) helped behind the scenes as a producer, but remained so in an uncredited capacity, as he did on the notorious exploitation flick, Deranged (1974). According to actress Jill Schoelen (Maggie), Clark was very involved during the shoot. She noted that the director and Clark would always confer during set-ups. Could this be another Poltergeist (1982) case? The Texas Chain Saw Massacre director, Tobe Hooper, received the ‘Director’ credit, but rumours persist to this day that producer and screenwriter Steven Spielberg was so involved with the production that – bar from shouting ‘Action’ and ‘Cut’ – he practically directed the thing.

Ronnie Taylor had a fine background as a camera operator. He worked on Ken Russell’s The Devils, Brian De Palma’s Phantom of the Paradise, Stanley Kubrick’s Barry Lyndon and George Lucas’s Star Wars. As a fully-fledged cinematographer, he signed on as one of the DoPs on Russell’s rock opera, Tommy, and Richard Attenborough’s Gandhi. He went off to Italy and filmed Opera (1987), for Dario Argento. Taylor would go on to further collaborations with the Italian maestro: The Phantom of the Opera and Sleepless. Among the cast, Tony Roberts (Annie Hall) makes a cameo as a professor and seasoned genre actress, Dee Wallace, took a small role as the heroine’s secretive mother.

Alan Ormsby, who worked with Bob Clark, as either a writer or director on Deranged, Deathdream and Children Shouldn’t Play with Dead Things, way back in the 1970s, left the production three weeks into filming. It is said he got as far as directing the Castle-style horror movies, before being replaced. Clark then hired Porky’s actor, Mark Herrier, to finish the job. Ormsby, it is worth pointing out, given his clear affection for old Hollywood chillers and a penchant for blood-curdling tales of terror, co-wrote the Cat People remake made by Paul Schrader. Amy O’Neill, the actress cast as Maggie, was also fired at the same time as her director and replaced by Jill Schoelen.

Popcorn fits neatly into the landscape of 1990s postmodernist horror. It might have a common-or-garden crazy-killer-on-the-loose plot centred on a typically Freudian primal experience, but it does have a different enough agenda. As a celebration of the genre and all those fondly remembered hours spent watching creature features, it’s not a world away, in spirit, from The Rocky Horror Picture Show’s opening tune, Science Fiction/Double Feature. Only here, it’s been given a slasher makeover and updating.

Popcorn is screening at the BFI in their Cult strand in April. For more information and to buy tickets: