BFI Cult: Four of the Apocalypse by Lucio Fulci 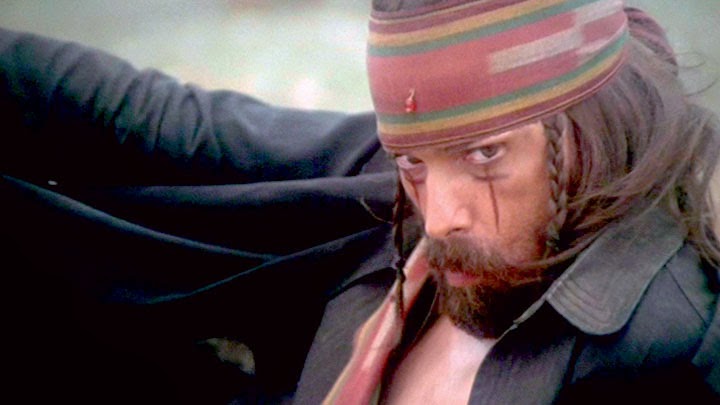 "Salt Flats, Utah. 1873. A bad town for a law-abiding citizen, and for this reason, Stubby Preston, a professional cardsharp, made it a point to stop there at least once or twice a year. But little does he know that this time around, he's chosen to arrive on the very day that the citizens' committee has decided to clean house." These words, delivered in a jaunty voice-over at the very beginning of Four of the Apocalypse (I Quattro dell'Apocalisse) to the accompaniment of an even jauntier thigh-slapping score, immediately establish a tone of jocularity, irony and fun.


Stubby (Fabio Testi), a vain peacock of a man, arrives in town on the stagecoach only to be intercepted by the grizzled sheriff (Donald O'Brien), and offered an overnight stay in a jail cell. Stubby shares this hospitality with three strangers: young pregnant prostitute Emanuelle 'Bunny' O'Neill (Lynne Frederick), a passed-out alcoholic called Clem (Michael J. Pollard), and African madman Bud (Harry Baird) who prefers the ghosts of the dead to the living. In a film that repeatedly plays upon the subjectively fluid notion of what it means to be 'lucky' (indeed later in the film a newborn will be christened 'Lucky'), these four characters may believe that their good fortune has run out (not that this stops them gambling even in the cell), but in fact in imprisoning them, the sheriff has also saved them. For that night a masked posse enters the town, murdering in cold blood everyone they encounter, but leaving the headquarters of the conniving sheriff untouched.

If this operation to 'clean house' represents the taming of the wild west, then the civilisation being imposed by 'law-abiding citizens' is rooted in anonymous, indiscriminate massacre. Meanwhile, the sheriff's motives for keeping Stubby out of harm's way derive not so much from genuine good will as from corruption: for he is interested less in redeeming Stubby's lost soul than in pocketing for himself the cash that Stubby is carrying. In return, these four cellmates are set free and become unlikely fellow travellers in a hostile world where both good and evil are along for the ride, and death is never far away. They have a putative destination - but here, as in any road movie, the journey itself is everything.

The Salt Flats sequence is only the first of many episodes in this picaresque horse opera, adapted by Ennio De Concini from two originally unrelated short stories by Bret Harte ("The Outcasts of Poker Flats", "The Curse of Roaring Camp"). On the road to the never-reached San City, thequartet will encounter a wagon train of Swiss evangelists, a Manson-esque badass bandito (Tomas Milian; the character was invented for the film), a ghost town and an all-male mining community. There are also, as one might expect in a film directed by giallo's sleaziest perpetrator Lucio Fulci, scenes of rape, torture, murder and even cannibalism. Yet this is nonetheless strange territory for Fulci, being, alongside Massacre Time (1966) and Silver Saddle (1978), one of his only spaghetti westerns. It is also a very idiosyncratic oater. Maybe it is not quite as 'out there' as, say, Jodorowsky's El Topo (1970) or even Giulio Questi's Django Kill (1967), but the mix here of good-natured jokiness and gravity (even depravity), along with strange excursions into the discourse of theology and gender, make Four of the Apocalypse a weird trip alright.

In how many westerns do the heroes have no guns (Stubby holds one for the first time in the film's final ten minutes)? In how many westerns does the villain first get his prey hopped up on hallucinogens before launching his perfidious assault? In how many westerns does a township of rugged male outlaws who "don't want no more truck with females" transform overnight, with the advent of a newborn, into magi, midwives and mothers? Altaville, where the aggressive masculinity of the west becomes feminised and maternalised, offers near the film's end a very different picture of civilisation from Salt Flats at the beginning - although just when Four of the Apocalypse appears to have turned its back entirely on the typical tropes of the western, a coda pits Stubby against bad guy Chaco, finally delivering all the expected conventions of the genre while also subverting and souring them in a cynical, decidedly one-sided showdown. "I don't know anything about heroes," Stubby had told Bunny in an earlier scene - and by the close, his own status as the film's hero (as opposed to just its last man standing) has become highly questionable.

For the geographically and seasonally varied landscapes that DP Sergio Salvati shoots so epically wide have also, by now, become a moral terra incognita through which Stubby and his ilk are always just (as a recurring song line has it) "movin' on". Meanwhile the soundtrack, written by Fabio Bixio, Fabio Frizzi and Vince Tempera, is entirely of the times in which the film was made rather than set - a hippy-dippy selection of upbeat folk ballads whose lyrics, referring explicitly to the characters and their onscreen exploits, serve as a kind of chorus that universalises the onscreen events as a transcendental quest.

Here the titular four embody, warts and all, a youthful counterculture in pursuit of a dream that may also be a mere mirage on the distant horizon. At the same time, they herald an apocalyptic era in which traditional values were being all at once reinstated, resisted - and rewritten. The result, both an outlaw odyssey and an utter oddity, comes as something of a revelation.

Four of the Apocalypse is screening in the Cult Strand at the BFI on the 5th and 8th of March. For more details and to buy tickets, click here.
at 23:13