The Avengers In Rural France 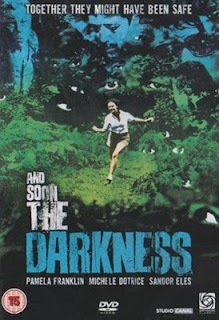 Forgive me for this click baiting post title. No, Thor and Captain America have not left the superhero rat race behind for a new life in the country under the blazing sun of Southern France, an experience plagued by their lack of grasp of the local language and a barrage of infuriating local red tape *cue obligatory shot of rain with voiceover "but it also rains in Southern France" as their newly bought gîte falls apart.* No, sadly, we live in a world in which whenever I mention The Avengers, I now have to specify it is the British TV serie I am referring to. Besides, I didn't call this post The Avengers Assemble In Rural France. So on to our subject, the film And Soon The Darkness, written by Brian Clemens, the man who wrote a whole lot of episodes of The Avengers (but also sadly Highlander 2: The Quickening).


I had actually never heard of And Soon The Darkness. In it, two young British women go on a cycling summer holiday in France, hoping to discover more of the country, exploring its smaller roads and charming villages. It soon becomes apparent that the two ladies had different ideas in mind however, with the more serious Jane (Pamela Franklin) hoping to adhere to a strict itinerary, while Cathy (Michele Dotrice) is more in the mood for taking things easy, sunbathing and catching the eye of a charming and slightly louche local man. After an argument, the pair splits up and Cathy disappears...

This starts off pretty well. Unusually for a scary British film of this era, no gothic mansion at night in the countryside, the action being entirely set in the sun drenched French countryside. And this is where the inimitable touch of Brian Clemens shines. His unmistakable touch was ever present in the Avengers, where the quietly menacing oddness in many of its episodes always emerged in deserted small villages and its surrounding countryside.

And it is perfectly well transposed in France in this story, where the not entirely friendly locals seem to hide some secrets. In the first act, there is a wonderfully pervading atmosphere of menace which does not rely on cheap tricks, coupled with a touch of Swinging Sixties vibe. Who is this smart and smooth but rather strange French man who seem to be not so randomly bumping into them at every corner? What about the middle-aged British woman whose offer to help seem to be hiding an underlying resentment? And what with the bickering couple trying to get Jane to just leave and never return?

To add to the disorientation, director Robert Fuest takes the bold decision of not putting any subtitles for some large sections of French dialogues within the locals, putting the viewer in the same frustrating state of confusion as the powerless Jane (unless you can speak French as I do, in which case the effect is rather lost). And this is blessed era for scriptwriter before mobile phones existed, a seemingly tranquil holiday quickly turns into a nightmare when you are lost in the middle of a foreign country full of rather strange and slightly hostile characters.

Yet there probably a reason why And Soon The Darkness, despite its great title, has not quite achieved a place in the collective memory of film fans. After the promising start, the film grinds to a halt, going around in circles, repeating itself even, as if writer Brian Clemens just lost inspiration and did not know where to take its story. Red herrings are thrown to put us off course, but to say the resolution is underwhelming is an understatement. For whatever reason, I was expecting the level of craziness of The Wicker Man but we certainly never reach it. And the initial sense of menace is rather lost, as the audience just looses patience and long for things to be wrapped up without having to endure yet another scene of "Jane does not understand what the locals are trying to tell her".

Interestingly, a remake was made recently which kept the original title but transposed the action to Argentina. I expect any of the rare qualities of the original to be completely lost in a derivative thriller. As for this one, fans of British cinema might as well check it out as a curiosity but do not expect much more. It is currently available on DVD through Studio Canal UK's former incarnation, Optimum Releasing.