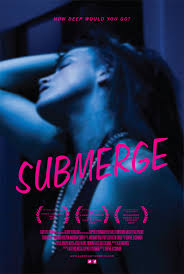 Mid March is one the best times of the year, winter is coming to an end, my usual April holiday is fast approaching and the London Lesbian and Gay Film Festival starts. This year was particularly difficult to get tickets though, with films selling out within the hour. I was lucky enough to get tickets for 'submerge' and 'Jack and Dianne'. Being Australian I was really looking forward to 'submerge', as its quite rare to see an Australian lesbian film.
The write up in the programme got my hopes up and unfortunately, I was quite disappointed by the tale of competitive swimmer Jordan (Lily Hall) and her struggles to keep up with her demanding schedule.
Last night was only the second ever screening of 'submerge' (it premiered in New York earlier this month at the First Time Fest), and NFT1 was sold out for the performance. What was great was the addition of director Sophie O'Connor, producer/writer Kat Holmes and Lily Hall, to introduce the film and do the Q&A after. Through the Q&A we learnt that the film has been nine years in the making, with funding being one of the major issues. Kat Holmes explained that they were advised there is a lack of lesbian porn, and that if they want to make money from the film, they should include lesbian erotica. The introduction of the film as a 'sexually charged' story leads one to believe there will be some hot scenes, but the film doesn't live up to it, with scenes being cut suddenly just when it's getting started.


Also interesting is that filming took place over 2 years, starting in Jan 2009 and finishing up in Jan 2011. Escaping to the hot Melbourne summer for a couple of hours is always a great way to spend an evening, especially when it's still so cold. The DJ in the Riverfront Bar was in fine form with excellent music, and the atmosphere was great. Also in the bar were the Aussie's  - Lily Hall posed for a few photos with fans, but then disappeared before I could make a move! I am looking forward to my next film on Monday, and spending more time at the Festival.

'Jack & Diane' is the second feature from Bradley Rust Gray, and this film was a a real surprise. I had read one or two reviews prior to seeing it, however they really didn't match up to what the film is about. The best way to see is the film is by going in with an open mind, and not expecting much. The film stars Juno Temple, as Diane, and Elvis Presley's granddaughter Riley Keough as Jack. They were both brilliant in this story of young love in New York. Unusually for a 'Womyns' film, there were a lot of men in the audience, but this was no doubt due to the Kylie Minogue cameo. She is quite good as the tattooed older woman, and I was happy to see her not trying to do a US accent. She actually sounded more 'Aussie' than her usual 'trying to be British' accent.

Last night I was able to see 'She Said Boom - The Story of Fifth Column' a wonderful documentary about the Canadian band Fifth Column, who are considered to be the original founders of what became the Riot Grrrl movement, and spawned the zine culture within the Queer punk bands. Director Kevin Hegge has taken his love of the music and put together a funny and very entertaining film that takes you into the world of Toronto in the mid 80's. Interviews with former band members Caroline Azar, G.B Jones and Beverly Breckenridge are filmed in different locations. We also hear from their  go-go dancer Bruce la Bruce (he is typically filmed in a male strip club), and Kathleen Hanna (Le Tigre) speaks about the huge influence the band had on her.
at 18:17