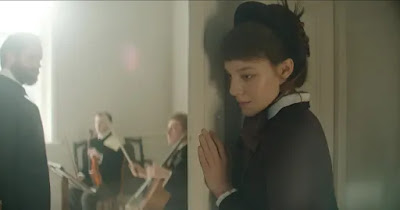 You never quite know what to expect with Krill Serebrennikov, his recent films each so different to each other with Leto (2018) documenting the Russian '80s rock scene and Petrov's Flu last year and its very topical title a wild blur between reality and fantasy.
His latest, Tchaikovsky's Wife in yet another departure came across as more traditional when it was announced in the official selection. In Tchaïkovsky's Wife, to put an end to some rumours about his personal life, the famous composer agrees to marry a young, smitten woman despite his romantic inclinations, a decision which will cause her untold misery.

The film is impressive as much for what it does as what it does not. It does not fall into the pitfalls of the often stuffy and dour period drama genre. Nor is it an over the top melodrama which the story could have elicited. Rather, it is assured and restrained tale of obsession and a character study in which much of Mrs Tchaïkovsky's personality and thoughts are kept out of reach for the first half and the director perfectly handles the dichotomy of how the audience logically expects her to react to how the events unfold in front of us and how she actually does.

Mrs Tchaïkovsky first spends a lot of time in a state of complete innocence with the reality of her situationbut the script carefully evokes her changing state of mind, going from ignorance to self-delusion when friends and even her sister in law tell her in black and white that her husband likes men, then bargaining with reality and finally descending into abject despair and depression when he puts an end to her marriage.

We are never quite given the keys to her behaviour and decisions apart from a few glances of a stern family life and quite why she becomes overwhelmed by this romantic infatuation and it makes it all the more compelling although throughout this emotional journey her state of mind is revealed to us more clearly and her feelings laid bare. Mrs Tchaïkovsky does not have to just contend with being unloved, it is made clear to her by her husband's friends how important the composer is to Russian society, not only does she not matter, she ought not to be a hindrance to his accomplishments.

An early, impressive scene set in the corridor of a train has the newly wed couple bumps into a friend of Tchaïkovsky and his young, handsome "companion", one that feels very claustrophobic and where the actress with just a glance already evokes her refusal to face reality when she does not question what is so obvious to anyone witnessing it. It is not just her who is trapped but also the men having to hide their true identities to society.

The director conjures up a very particular atmosphere in the salons and grand houses of Russian high society, not quite sterile given the opulence but one of lifeless indifference and loneliness filmed with a harsh light. He then contrasts this with scenes in which the composer spends time with his friends of the same persuasion filled with warmer light and ebullience.

The directing style is often low-key but the director allows himself a few, perfectly judged flourishes and striking scenes, particularly the ending that feels straight out of an angry experimental theatre troupe yet it works.

Alyona Mikhailova in the titular role is excellent, never chasing sympathy but in perfect synchronicity with the script, not letting us in her inner life at first but erupting in outbursts too when needed, the director's sympathies obviously being directed at her but with him not blind to her numerous flaws, even laying bare some truly unspeakable and unexpected traits.

Alyona Mikhailova is an early contender for best actress and the film showing us yet another facet of Krill Serebrennikov's versatile talent.