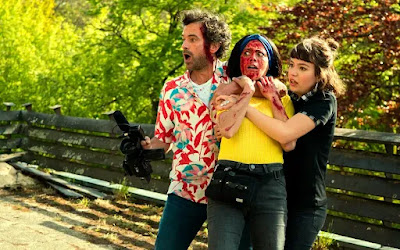 When Final Cut was announced, a French remake of the cult Japanese low budget zombie horror comedy with a twist One Cut of the Dead, it sounded like one of the most unlikely projects this year. Did such an idiosyncratic film need to be remade? There was the risk that at best it would be a close if unnecessary retelling, at worst losing what makes the original so special. Then the film was announced as the Cannes opening film and what a fantastic decision that was, only a few years after The Dead Don't Die, in a similar sub genre but that directed by a true auteur, Jim Jarsmusch whereas the idea of all the local dignitaries and their notoriously low tolerance for any unusual films being exposed to the least salubrious corners of genre cinema was exciting indeed.

In Final Cut, jobbing film director Rémi (Romain Duris) and his crew tackle the shoot of a low-budget zombie horror film that has to be done in one shot and broadcast live online, bringing its share of technical difficulties and trials with just one imperative: keep going no matter what happens...

For those who have not seen One Cut of the Dead, it might be worth not reading about it as there a twist not so much in its narrative, more in its structure and Final Cut is a faithful remake in that respect, which means being bewildered at first with the seemingly terrible production values and mistakes until it all starts making sense in its second act. However right from the start, Michel Hazanavicius adds his touch to the story, with the characters being given some Japanese names despite being obviously French, a baffling choice that you just have to keep watching to understand why...

Then the film turns into and an unusual remake in the sense that it somehow integrates One Cut of the Dead in its story, adding a layer to the existing film within a film structure and also bringing back the character of the producer from the original, Donguri (Yoshiko Takehara) and fleshing out her part, one of the many good ideas the director/scriptwriter has as she elicits some of the biggest laughs.

Final Cut addresses how unlikely its own existence is as this culture of very low budget horror does not really exist in French cinema (a few exceptions aside like Jean Rollin) in the way it does in America or indeed Japan, there is also a tacit agreement that a straight remake would not have worked. So Michel Hazanavicius adds an element of culture clash, getting the world of Asian low budget horror and French comedy to collide and coexist within the same narrative frame, particularly in the second act that is more of a marked departure from One Cut of the Dead. Indeed there is a touch of Call My Agent! to all the French film production shenanigans.

It is that communication between cultures that is the greatest quality of Final Cut and a case study on how to make a remake right, honouring the original film, adding one's personal touch as well as a self-reflective quality about its own conception.

As the the final act that is the real payoff of both films, while it might not have quite the same energy of the original, it is just as hilarious and where all the tears and sweat involved in gonzo filmmaking are laid bare as well as a respect for the craft when you have to keep going no matter what happens (and a lot does!), ending on a joyful note of camaraderie.

The ensemble cast is uniformly excellent and totally game for the madness of it all but the real knockout is Finnegan Oldfield as an arrogant actor (the future French Adam Driver, we're told), darling of the Cannes Film Festival and who name drops Lars at every occasion.

It should not have worked or might have been at best unnecessary yet Final Cut is an unexpected success and while of course it owes so much to the original, it is very much its own thing.

Official Selection, Out of competition.