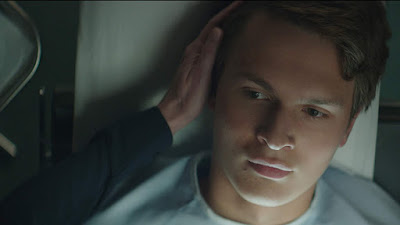 Genre cinema used to be underrepresented at mainstream film festivals not so long ago, so it is refreshing that is finally being embraced. Here at the London Film Festival, it is mostly (but not exclusively) in the Cult Strand, where Duplicate was presented.

In Duplicate, Jonathan (Ansel Elgort) is a career-minded young man with a regimented life, working in an architectural firm and without any sign of any love life or even friends. We see him communicate via recorded video-tapes with a man called John (also Ansel Elgort), who looks just like him but with a very different and more fun outlook on life. They share a bond on top of their very obvious resemblance, but we do not know what it is at first, and there are no signs of any other interactions between them apart from those messages. That bond is about to be jeopardised however as a series of events threaten their carefully planned daily routine.


Science-fiction does not always need large budgets and flashy special effect, it is at its best when brimming with ideas. In Duplicate (also known as Jonathan for its US release), director Bill Oliver eschews any heavy-handed material signifiers of the genre, instead using neat interiors, sterile offices and shades of beige to give it a slightly different, "sci-fi" touch, and it works beautifully. The art direction feels just that little bit otherworldly but not enough to be distracting.

It would not be fair to elaborate and reveal too much about the relationship between Jonathan & John, as part of the interest of the film is trying to understand what they are to each other, or even what they are to begin with. Too often some science-fiction scriptwriters come up with a smart concept, only to then fail to develop it but no such thing with Duplicate. It has a nifty premise as its core but the script actually does something with it, and while it is all very low-key in appearance, the audience slowly begins to realise the dizzying psychological ramifications of the story and its unexpected emotional depth. 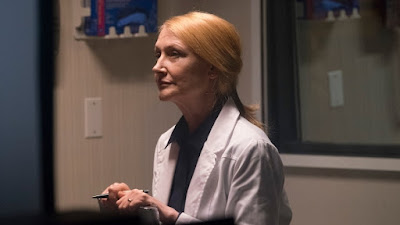 Bill Oliver's direction is the perfect match for the clever and engaging script (which he co-wrote alongside Gregory Davis and Peter Nickowitz), a tad oppressive and detached at first, then getting closer and closer to the characters and their emotional turmoils. As for the cast, Ansel Elgort, recently seen in bigger budgeted films such as Baby Driver (2017) and the Divergent franchise, is a revelation in the dual-role of Jonathan and John, which he totally inhabits with an impressive lack of artifice. The only physical difference between the two is the slightly tussled hair of John versus Jonathan's neat barnet, yet he manages to make either of them instantly recognisable through the subtlest difference of facial expressions and mannerisms. Patricia Clarkson in a supporting part brings her usual class and unique presence.

Duplicate is an impressive debut for Bill Oliver, a compelling, low-key yet terrible affecting science-fiction film.

Duplicate was presented in the Cult Strand of the London Film Festival 2018. It will be available on DVD and Digital HD from the 28th of January 2019.