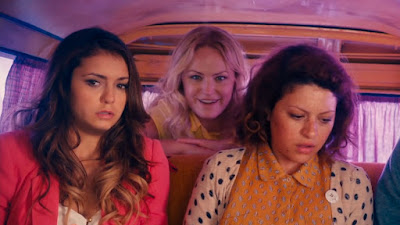 If, like me, you were an fan of horror films in the 80’s/90’s, you’ll remember the final girls, one of the most regular tropes of slashers. You’ll also remember the actresses who played them, or perhaps not, as none of them ever had much of a career after their brief turn in the limelight, and in those pre-IMDB days, you had no idea what had happened to them. Most probably smaller parts in barely seen films, bit parts on TV and little else.


While deconstructiong slashers is nothing really new (See Detention, The New Nightmare, and, obviously, Scream), The Final Girls has a very clever premise, in which a bunch of teenagers find themselves literally transported into an 80’s horror film, whose codes they must follow to survive (think The Purple Rose of Cairo meets Friday the 13th). The film is a little uneven, as, despite a few really smart ideas (loved the flashbacks!) and some really funny scenes, it does not really do horror very well. The death scenes are too brief and unimaginative, and there is zero tension. Where the film shines however, is through its completely unexpected emotional side.

The twist in the story is that one of the teen’s mum was an actress in the film they end up in, who had died a few years ago, hence a tearful reunion for her daughter who finds herself facing the character her mum played in the film. All the characters are likeable (which is somehow a departure from slashers where they are totally dependable), but Malin Akerman as the mum, a wannabee movie star who never got anywhere, as well as her on-screen character, a shy girl with confidence issues, is wonderful. Through her, director Todd Strauss-Schulson conjures up an affectionate tribute to all these young actresses who never quite made it in Hollywood yet made the days of a generation of young horror fans of that era, and her unexpectedly moving stripping scene with “Bette Davis Eyes” in the background will bring tears to your eyes.
at 21:08