The Swarm by Just Philippot - review 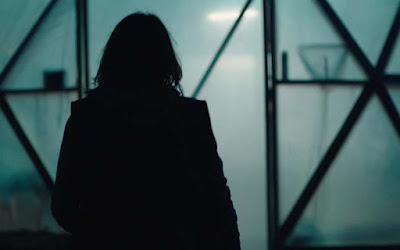 French genre cinema is relatively rare these days compared to the heydays of the New French Extremity over ten years ago, with the recent Raw by Julie Ducournau a notable exception. Then along came The Swarm (La Nuée) and the prospect of a French bugs horror was intriguing.
In The Swarm, widowed mom Virginie (Suliane Brahim) struggles to make a living and support her children in rural France. Her latest project, the breeding of edible grasshoppers, did not deliver the expected yield and brings ridicule to the whole family, especially her teenage daughter who gets bullied at school and who is embarrassed by her mom's unsuccessful and odd endeavour. A chance discovery leads to a reversal of fortune but also comes with a heavy price.
We have seen many tales of deadly spiders, bees, ants... and all it takes is a few close shots to trigger a tingling in the back of audiences' necks but the choice of grasshoppers is one of the best ideas of the film.  These placid insects, despite their biblical undertones, do not carry the same nightmarish quality and indeed The Swarm has many close-ups in which they appear otherworldly, even strangely beautiful but not particularly menacing. An even smarter idea is to go against the general horror trope where the creatures are often just hinted at before a full reveal in the climax whereas the director goes the opposite way, showing less and less of them as the story unfolds and only from afar, which makes their threat even more frightening.
Some films just grab you from the very first scene. Just Philippot is in total control of The Swarm from the start, creating a disturbing atmosphere with very few artifices, through some perfectly composed and unsettling shots as well as some discrete but creepy sound effects. Patient but never dull and constantly surprising, the film takes us to some unexpected places indeed but the tone remains coherent and realistic throughout. Do not expect it to match some of the grossest bug horror classics such as Squirm but it is remains tense and disquieting the whole time and  packs a punch when it needs to. The sparsity of its gruesome scenes make them all the more affecting, all the way to an intense finale featuring a spine-chilling chase at dusk.
The Swarm is also case study on how to add a social layer to a genre film without coming across as a lecture or worse, patronising. Suliane Brahim does not chase sympathy and neither does she overdo the mental turmoil, with a grounded performance that makes her character's choices, however unlikely, totally believable. She is a determined, quietly strong woman and her difficult relationship with her daughter who dreams of normality gives the film some emotional depth. There is also the depiction of the depressed farming industry in France in the background but the director is careful not to point the finger at an obvious target.
The Swarm is a masterful feature debut by Just Philippot, an exciting new voice in genre cinema. The film was selected for the Semaine de la Critique Cannes sidebar selection that was subsequently cancelled before screening at Sitgés then earlier in the week at the Gérardmer Film Festival in France, where it just won the jury's prize. It has been acquired by Netflix.
Review by Laurent de Alberti
Star rating: ★★★★★
The Swarm. France 2020. Directed by Just Philippot. Starring Suliane Brahim, Nathalie Boyer...
at 21:28