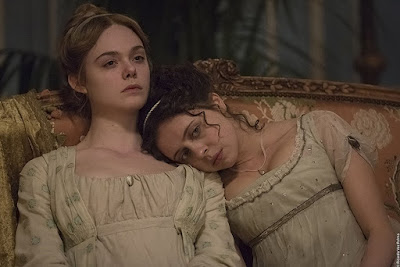 
Director Haifaa Al-Mansour made cinematic history in 2012 when her critically acclaimed film Wadjda became the first feature film to be shot entirely in Saudi Arabia and the first to be directed by a female Saudi director. With the release of Mary Shelley, the director’s second feature and first English language film, Al-Mansour might seem like a million miles away from her humble beginnings, but on a closer look, it’s easy to see what motivated the director to dip her toes into such uncharted territories. Depicting the Frankenstein writer as a bright and angsty teenager with an unbridled lust for life and knowledge, Al-Mansour has managed to inject a real sense of adventure and youthful exuberance to a story which could have easily suffered the same fate as any other hackneyed costume drama biopic were it not for the commendable observational skills of its director.


When sixteen year old Mary Wollstonecraft Godwin (Elle Fanning) is sent away from her home in London to stay with friends in Scotland to avoid further confrontations with her stepmother, the young woman is distraught at the thought of leaving the only place she has ever known and loved. However, when Mary is introduced to handsome poet Percy Bysshe Shelley (Douglas Booth) by her Scottish hosts, the two fall instantly in love and can’t bear to be apart. Back in London, Mary is soon joined by her charming, if not entirely truthful admirer, who despite still being married with a child begs her to elope with him.

Written by Emma Jensen and with additional writing from Al-Mansour herself, Mary Shelley focuses on the most part on the tumultuous relationship between Mary and Percy, and culminates with the publication of Mary’s now infamous novel, which was written over one rainy evening in Geneva after a dare from Lord Byron. The film also touches upon the couple's fleeting friendship with an already infamous Byron (Tom Sturridge), as well as Mary's fraught relationship with her stepsister Claire Clairmont (Bel Powley). Clairmont who went on to give birth to Lord Byron's daughter Allegra out of wedlock, is also thought to have had an illicit affair with Shelley himself. This particular point is sadly only alluded to in passing rather than being fully addressed.

Managing an impeccable English accent, Fanning offers Mary as a thoroughly modern and headstrong young woman who soon learns that she can only ever rely on her own judgement. While Douglas Booth is brilliant as the suitably roguish and duplicitous Shelley. Elsewhere, Tom Sturridge puts in a deliciously over the top turn as the devilishly handsome and cruel Lord Byron.

Overall, Mary Shelley might present an overly melodramatic version of the events which let the release of one of the most read horror classics in history, but Al-Mansour should be nevertheless commended for her incredible attention to detail and romance infused narrative. A wonderful story told with heart and abundant enthusiasm.

Mary Shelley is in cinemas from Friday July 6th.
at 18:54