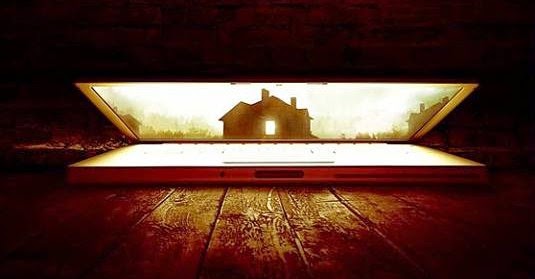 "Wow! You're like Shia LaBeouf from that movie with the creep next door." Here, catching her first glimpse of the electronic monitoring device tethered to the ankle of Daniel (Keir Gilchrist), Abby (Stella Maeve) is only giving voice to what we are already thinking. For like the LaBeouf-starring Disturbia (2007) and also not unlike the more recent Housebound (2014), Dark Summer concerns a young adult placed under house arrest and equally trapped in a genre scenario.


Yet there are differences too. Far from spying on "the creep next door", Daniel is himself the creep, confined to his home after being convicted of cyberstalking Mona Wilson (Grace Phipps), an aloof emo from his former high school. If supervisor Stokes (Peter Stormare) carefully lays down the terms for Daniel's house arrest - no use of social media, "no unescorted minors in the house, nor drugs, nor alcohol" - Daniel is quick to breach all of these, getting from his childhood friends Amy and Kevin (Maestro Harrell) not just regular covert visits, but also an untraceable router (so he can log on undetected) and a supply of the sedative-hypnotic Ambien. Yet the other condition - "no contact with Mona Wilson" - is broken by the girl herself, who skypes Daniel out of the blue, and dies shortly afterwards.

From this point on, Daniel's life becomes a nightmare of grief and guilt, as the person with whom he was so monomaniacally obsessed keeps coming back to haunt him, with evidently malicious intent. Dark Summer opens with stills of Daniel, Abby and Kevin in more carefree times - and although these are clearly physical photographs, slowly turning in midair on the threads from which they visibly hang, they look for all the world like a photo gallery on Facebook. Accompanying these images, Austin Wintory's sedate score for strings and piano is occasionally disrupted by glitchy computer-generated squelches and distortions.

For much as Daniel keeps returning to the internet from which he has been debarred, the film's analogue world keeps being infiltrated and infected by digital motifs. Daniel sleeps surrounded by computer cables, and under a ceiling decorated with 1's and 0's. An electronic buzz and hum repeatedly insinuate themselves into Herwig Maurer's subtly chiselled sound design, diegetic insofar as Daniel appears to hear them along with the viewer. And Mona's ghostly presence is signalled by, amongst other things, the sort of warm green glow typically emitted by a computer monitor.

There is method here. For while director Paul Solet, in his follow-up to 2009's mother-misgiving Grace, may be expertly twisting and turning his way through a thriller of suburban paranoia and claustrophobia, the subtext of Mike Le's screenplay is the fluid, malleable nature of identity in the digital age. Stay-at-home, hack-happy Daniel already struggles to cope with the opposite sex and has never actually talked to Mona, in real life or otherwise - but with both his parents out of town and offline, he is living in a state of boxed-in isolation that merely amplifies his sense of geeky alienation.

It is obvious that the very real Abby adores him, but Daniel is torn by confused, driven feelings towards a person who exists for him only virtually. Prevented literally from just getting out more, Daniel (who turns eighteen during the course of events) does not realise - until it is too late - just how much his obsessive investment in online fantasy is hobbling his road to adulthood. For here the real, virtual and supernatural worlds merge in a bizarre love triangle that allows Solet to show the craft of a true manipulator of onscreen events - and to give viewers more than one kind of creep.

Out in the USA today, no UK release date announced so far
at 22:28