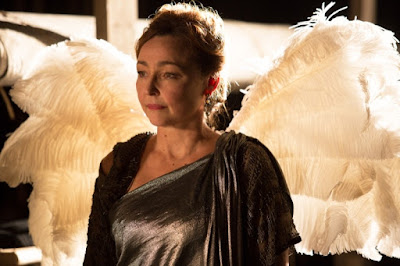 Marguerite is loosely based on the story of real life American socialite Florence Foster Jenkins, who became infamous for her insistence in pursuing a passion for singing despite her tragic lack of abilities. Here the character has been turned into a wealthy baroness in the Paris of the 20's, where the memories of WW1 are still raw. While originally keeping her "talent" to a select group of acquaintances for private concerts, a chance encounter with a journalist and an anarchist leads her to a bigger project, singing on stage for a real audience, much to dismay of her husband and those who try to protect her from the truth.

Director Xavier Giannoli and actress Catherine Frot are not household names in the UK, yet they are big stars in France. The former made a name for himself with The Singer (2006) with Gérard Depardieu, the story of a melancholic, ageing ballroom singer. The latter has had a consistently rich and rewarding career over the last 20 years, often with comedic parts but with a few notable dramatic ones too. She is best known here in the UK for her part in the terrific The Page Turner (2006). 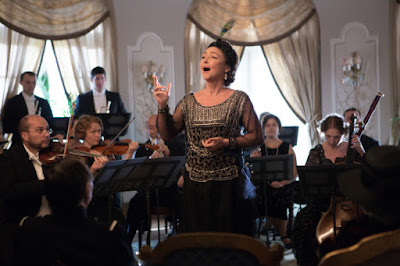 Marguerite has the veneer of the sort of middle class, award baity, period French dramedies that is easily sold to foreign markets (despite French cinema's dwindling commercial success in the English speaking world in the last few years), the sort screened in cinemas that target middle class audiences with premium ticket prices and white wine. Yet the film is a lot less conventional that it appears.

Never does it come across as filmed TV drama with frou-frou costumes and a bland direction. On the contrary, Xavier Giannoli has chosen an intriguing colour palette with a lot of stark contrasts in the daylight and some muted, darker shades at night, evoking the harshness of a post war world which is just starting to have some fun again.

Yes, it is very funny in parts, it is is impossible not to laugh at the truly deluded Marguerite and her atrocious singing. But it is such a joy to see her being truly happy when singing, faced with the gloom of a hypocritical and self serving clique, not to mention a cheating husband. Xavier Giannoli explores yet again the loneliness of the artist in a world that does not understand them, and the indescribable pleasure of performing. Dance, dance or we are all doomed claimed Pina Bausch, here Marguerite sings or everything is lost in her life.

As Marguerite's reluctant and flamboyant singing teacher, Michel Fau with his unusual physique and line delivery is absolutely hilarious, and in a less flashy but just as important part, Denis Mpunga as Marguerite's adoring servant, and most loyal companion, is impressive, working in the shadows to sustain her dream. 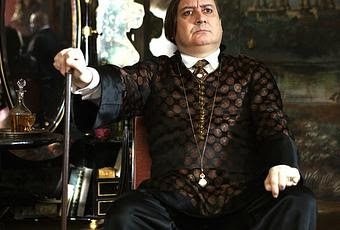 But it is Catherine Frot's film and she is quite simply, phenomenal. Other actresses might have overplayed the part and ramped up the ridicule (and it will be interesting to see Meryl Streep's take on this character). But her interpretation is a lot more subtle, mysterious even. The audience is never entirely sure whether Marguerite truly believes in her talent or not. Through subtle touches, a lingering glance, a pursed lip, the French actress evokes the loneliness, the past, the emotional turmoil...

And she perfectly conveys how a passion for the arts can transcend a crass world of money and hypocrisy. In a very effective early scene, Marguerite is used for her comedic value in a piece staged by some anarchists to ridicule the French society, yet she gives it all she has, despite the silly costume she is made to wear and the farcical stage setting. But the highlight of her performance, and of the film, is a very moving scene during which, while on stage, and for a few fleeting seconds, Marguerite reaches for her husband and re-establishes an emotional connection through her singing that had long disappeared. Catherine Frot won a much deserved Best Actress César for her performance, the pinnacle of her career so far.