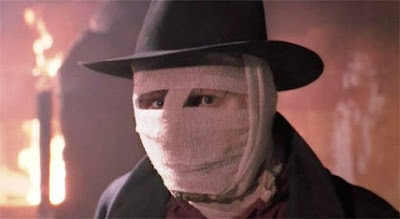 Darkman is a film about transitions. Mild-mannered scientist Peyton Westlake (Liam Neeson, showing early promise of the unlikely action hero he would later become) is trying to develop a synthetic skin to help burn victims, but has not quite achieved the breakthrough that will allow the engineered dermal cells to stay coherent for more than 99 minutes. He is also living half the time with his DA girlfriend Julie Harris (Francis McDormand), who is currently considering his marriage proposal. Driven, dedicated and slightly dull, Peyton is an everyman between states, with a brilliant future just beyond his grasp.


Unfortunately, Julie's discovery of a memorandum that incriminates ambitious property developer Louis Strack (Colin Friels) brings psychopathic mobster Robert Durant (Larry Drake) calling on Peyton - and the scientist's future will be snatched away as he loses his hands and half his face, and is left for dead. With his pain receptors surgically inhibited and his adrenaline flowing unchecked, Peyton is reborn as a clever but deranged vigilante who can - temporarily - wear anyone's mask. Yet even if Peyton somehow manages to emerge alive, if not exactly unscathed, from his revenge attacks on Durant and his gang, can his relationship with Julie survive his transformation into 'Darkman'?

Flush with success from his indie horror hits The Evil Dead (1981) and Evil Dead II (1981), Sam Raimi was also a man in transition, hoping to make a big superhero film. After failing to secure rights to Batman (Tim Burton's film came out in 1989, one year before the release of Darkman) and The Shadow (eventually adapted by Russell Mulcahy in 1994), Raimi decided to invent his own imperfect hero from scratch, like one of the fragile face masks that Peyton reconstitutes from pre-existing images. The result, after many rewrites and much studio interference, was Darkman - a figure half-formed, part man part monster, whose climactic battle takes place, significantly, in the inchoate space of a building site. For this is a new mythos in the making, reclaimed from old, long-abandoned territories.

Where Burton's Batman was praised for its gothic mise en scène, Darkman (which shares Batman's composer Danny Elfman) draws a different kind of gothic inspiration from the Universal monsters. For Neeson's reclusive, bandaged, roof-hopping mad scientist is obviously a composite of the Hunchback of Notre Dame, The Phantom of the Opera, Frankenstein, The Mummy and The Invisible Man, while Peyton's use of masks literalises Lon Chaney's status as "the man of a thousand faces". Indeed, horror is a key reference point for Raimi, from the recasting of An American Werewolf in London's Jenny Agutter as another hospital medic, to cameos from genre filmmakers John Landis, William Lustig and Raimi himself. Even Bruce Campbell, famous for playing Ash in Raimi's Evil Dead series, puts in a brief but prominent appearance here.

Certainly Raimi does not forget his roots, and with that comes some of his (then) signature corniness and zanily grotesque humour - whether it is Durant's bizarre penchant for collecting fingers, or a scene in which a stuffed pink animal becomes a vehicle for inhuman rage and anguished self-revelation ("Take it!", Peyton bellows with wide-eyed absurdity to Julia, "Take the fucking elephant!"). One scene, in which Peyton uses an upturned metal funnel as his "funny little hat" and sings "See the dancing freak!" - with only a cat for his audience - is a pure Raimi moment, combining comicbook slapstick and off-the-hook mania in a combination only previously seen in Evil Dead II.

Yet as well as harking back, Darkman was also looking forward, and its impressive action scenes - including a vertiginous final fight on and across highrise girders - served as a calling card for Raimi's future, gravity-defying work in the Noughties Spider-man trilogy. And while Darkman may not quite have entered the pantheon of 'classic' superhero flicks, its influence has remained. Watching Louis, suspended upside-down over the edge of a building, declare "Do it, Westlake… Dropping me, it's not really an option for you, it's not something you can live with", it is hard now not to think of the Joker in his similar position (though with a very different outcome) at the end of The Dark Knight (2008) - while the deep scarring of Louis' ends-justify-means attitude to world building can still be discerned in, e.g., the characterisation of Kingpin in TV's Daredevil (2015).

"UNSTABLE!" reads Peyton's hand-scrawled note at the bottom of a sheet of calculations, in words which describe all at once the skin cells with which he is experimenting, his own crumbling psyche, and the mercurial form of Darkman itself. For Peyton's inner conflict is also the film's. As the scientist turned murderous bogeyman must wrestle with his decaying humanity, the film also struggles to find a human story beneath all the icky prosthetics, identity-stealing plot mechanics and green-screened spectacle. That it - broadly (in a film where everything is broad) - succeeds is due less to the hokey narrative and over-the-top dialogue than to the awkward heart that Raimi brings to his all-too-ordinary couple in extraordinary circumstances. Caught between comedy and tragedy, sadism and sentiment, Peyton, it seems, cannot leave the horror of his actions fully behind him, and so vanishes alone into an unknown future. Eventually two direct-to-video sequels, Bradford May's Darkman II: The Return of Durant (1994) and Darkman III: Die Darkman Die (1995), would come out of the shadows, but neither would achieve the original's unhinged charm.

Darkman is screening at the BFI as per of their Cult Strand on the 25th & 28th of June. For more information and to book tickets, click here
at 21:23