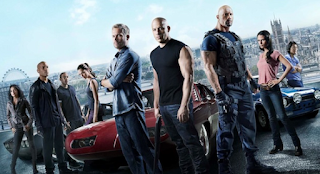 Plot: Dominic Toretto (Vin Diesel), Brian O'Conner (Paul Walker) and their crew have retired after their Rio heist left them millionaires. Growing homesick however, they are drawn back behind the wheels when former foe CIA agent Luke Hobbs (Dwayne Johnson) offers them a pardon in return for their assistance to stop a team of mercenaries with a nefarious plan.

The Fast & Furious franchise is an oddity. After some inconspicuous beginnings, it has actually grown from strength to strength. The first film, The Fast & The Furious was just a teenager wet dream, with fast cars and loose women, a very uninvolving proposition outside of its limited target audience. And after 2 Fast 2 Furious and Tokyo Drift which did not fare much better, there was a slight improvement with Fast & Furious, before Fast 5 changed the game completely, garnering some unexpectedly great reviews and boasting the higher box office return to date.


Usually, pandering to a bigger audience is a surefire recipe for disaster, but this is precisely what the film did, and all the better for it. Director Justin Lin kept the identity of the serie but broadened the appeal, by making the characters a lot more likeable, and propelling the franchise from the abyss of its subpar MTV video ersatz's roots to a world of exciting globe-trotting action which I defy anybody to dislike.

Fast 5 had several great ideas. It brought back all the major characters of the previous films together, an eminently watchable mötley crüe of actors with a great ensemble chemistry. It also introduced Dwayne Johnson, whose acting ability have vastly improved since The Scorpion King, and with the best raised eyebrow since Roger Moore, bringing in an unsuspected presence and comical timing. And while the serie had already travelled to Tokyo, it used the very picturesque Rio de Janeiro to great effect, with a heist involving fast cars and a giant safe dragged in the streets that remains one of the best action scenes of the recent years. 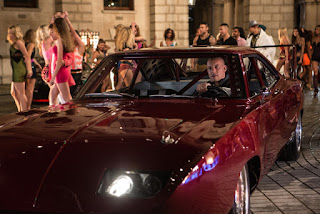 Fast & Furious 6 does not tinker with the tried and tested formula of its predecessor. (Why is not called Fast 6 is hear you ask? Take a minute or two to think about it). Everybody is back, plus a ghost from the past (this is not a spoiler UNLESS you have not seen the ending of Fast 5), Michelle Rodriguez. But is it as good? Very nearly.

To get it out of the way, I'll get my minor niggles out first. The new villain, Owen Shaw (Luke Evans) is at once bland and psychopathic, with no presence whatsoever, and whose gleeful insistence on collateral casualties jars tonally.

And while it might be rather exciting for us, Londoners, to see our city takes centre place, it feels like a false good idea. It just does not have the versatility and unique beauty of Rio de Janeiro, limiting the scope of what can be done within its streets (the film does manage an incredible car chase at night however), having to move the action to Spain to open things up a little. And we could have done without the very contemporary London cameo, a short scene which looks like a Rimmel advert (no, it's not Kate Moss).

Also, with the need to introduce a couple more characters while keeping the existing ones, I do worry the franchise runs the risk of getting too big and neglecting some, even though it had managed to handle its group cast so well in the previous film . Here Jordana Brewster, despite having shown to be a force to be reckoned with behind the wheels, is a bit left aside, (although she is thankfully brought back for some car action near the end), as is Elsa Pataky. And Gina Carano, as Dwayne Johnson's sidekick, while bringing her fantastic physicality to a couple of incredible fight scenes with Michelle Rodriguez, struggles a little bit with her acting, while facing such a distinguished and established cast (even though she has already proven that she CAN act in Haywire). Finally, the middle part sags a bit.


But this is all minor. The action is just as exciting as anything the franchise has created. Yes, the director does use some CGI for some of the bigger set pieces (and watch out for an almost Matrix like jump scene which had everybody applauding in the cinema!), but he never forgets the keep some old school physicality, with some gritty punch up scenes, and car crashes galore. Thanks to a gifted sense of direction and a tight (but not epileptic-inducing) editing, we are plunged in the middle of the action without ever feeling lost, and it's mightily thrilling. A fantastic scene on a motorway involving a tank sets itself to be the highlight of the film, only to be matched by an even more insane last scene, a car chase on the tail of a cargo plane, seemingly taking place on the world's biggest runaway, with the whole cast fighting in and out of the plane,  which is quite simply brilliant.

The humour is also perfectly balanced, never slowing down the action, but making the film a lot more involving, carried by its fantastic cast. Dwayne Johnson, Vin Diesel, Paul Walker, Ludacris, Tyrese Gibson and Sung Kang are all engaged in a group bromance and their banter sparks. It has to be said, the film's welcome racial diversity is sadly a rarity in the world of blockbusters. And the women are no damsels in distress, with Jordana Brewster, Gina Carano, Elsa Pataky, Gal Gadot and Michelle Rodriguez all proving the equals to men, again, still a rarity in that sort of films. There is also a welcome emphasis on the importance of the group's friendship which never feels naff.

I saw this with a brilliant audience in a packed cinema, and this is how it should be enjoyed. They laughed, cheered and reacted at all the best bits, and right now, outside of the Marvel superhero films, I cannot think of a blockkbuster franchise which is as successful.

The scene directly before the end credits, which opens the way to what is set to be a fantastic Fast 7, drew the biggest cheer from the crowd, so it sounds as if we are in safe hands. DO NOT check out Fast & Furious 6's IMDB page by the way or it will ruin the surprise. Since the franchise has grown bigger, and brought in a new audience as it went along, I would say it does not matter so much if you have not seen the first four films but I would definitely check out Fast 5 before seeing this one.

Fast & Furious 6 is thrilling, exciting, and thoroughly entertaining, with some fantastic action scenes and a good dose of humour too, thanks to its great cast. It is not often that I bother with blockbusters on my blog, but I wholeheartedly recommend it.